Posted on September 30, 2014 by Alisha Klapheke

currently playing on my iPod: Summerhead by the Cocteau Twins

Picture Lucrezia Borgia in The Borgias. The hair? Check. The sly smile? Yep. And that dress? Definitely. 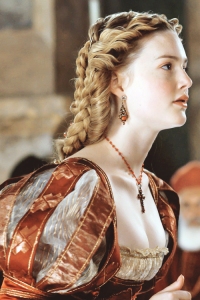 Characters’ clothing tell viewers/readers much about setting, personality, and conflict within a story.

Without Lucrezia’s gowns, we wouldn’t have that visual representation of her life situation. Her dad is the pope, and her family holds the wealth of the western world in their gloved hands. The excessively rich fabrics Lucrezia dons contrast sharply with the ragged cloaks and bare feet of the regular folks in Rome. And Contrast = Conflict = Interesting. We know she doesn’t hate being so much more wealthy than the populous. She wears what she wants, how she wants. No apologies. She is no humble nun. When she wears bright, outlandish patterns and colors, we see Lucrezia as proud of her looks, confident.

What should your characters wear?

Patched clothing might mean a lack of funds, but it may also point to a determined nature or perhaps a disguise. Dark colors could mean your character has a serious demeanor. Or has he just been through some tragedy? Do the holes in those jeans mean she is depressed or casual? Be specific. Pick out a piece of clothing now and then and highlight it, giving readers the chance to interpret without telling them what it might mean. 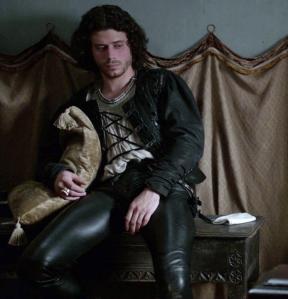 What he chooses to wear says a bucket about who he is. When he has to, he wears his cardinal reds, but the second he has any excuse to shed the church gear, he does. He slips into those fantastic black, leather slacks and dark cloaks. He wants to be a soldier, an assassin—the opposite of the role his pope daddio has picked for him. When Savonarola is berating everyone in Florence about vanity, does Cesare (there for a visit) trade his fancy pants for a Dominican monk’s sack-like robe in the face of the mobs? Nope. We see Cesare as bold, daring, maybe even foolish. But he sticks to his guns. He is who he is, and no one but himself will influence/alter that.

Don’t forget to clothe your characters, writers, and clothe them well!

This entry was posted in writing and tagged characterization, The Borgias, writing. Bookmark the permalink.