currently playing on my iPod: Three Women by Jack White

One spot I liked was The Pink House. In 1712, it was a tavern. Now, it’s an art gallery. Perfect. With its Bermuda stone, pink walls and creepy-looking gambrel roof, it just looks like a story waiting to happen.

And here’s the Huguenots’ church. (Just so you know, Huguenots are a specific kind of French Protestant, who were kicked to the curb by Louis XIV.) The Huguenots have had a church in this beautiful place since 1680ish. A fire and a re-do later, they have the one pictured below, built in 1844. They still use it as official Huguenots. And they make sure it still looks like a big, ole wedding cake. As one does. It used to be called “the tidal church” because the much of the congregation (some of which were Norman and Carolingian nobles) owned and worked on inland rice plantations. They had to rely on the tides to boat to services in Charleston. The service times reflect tide timing.

Another cool thing about the French Quarter is the cemeteries. Call me macabre, but you can learn a lot of history from tombstones. Dates. Names. Family connections, Artistic styling. Current residents and their ties to those in the ground. It is fascinating. The cemetery near the church holds the remains of many French nobles as well as Henry Brintell Bounetheau, a miniature portrait painter who created likenesses of William Ravenel (whose name you see everywhere in Charleston) and Nathanael Greene (google it–you should know this name). 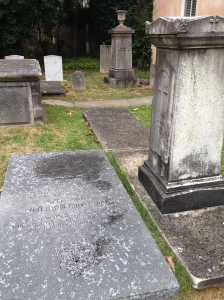 Charleston’s French Quarter surprised me with its color and history. I had no idea what I was getting into as I left that BBQ brewery and headed down its streets. I hope you get a chance to visit someday. 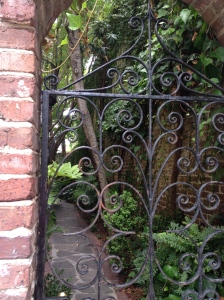 This entry was posted in travel and tagged cemeteries, Charleston, French Quarter, Huguenots. Bookmark the permalink.