Squee! I went to Edinburgh!

currently playing on my iPod: This Place in Time by Colleen

Edinburgh is full of ghosts. Some are literary: Robert Burns, Robert Louis Stevenson, JK Rowling (I know she’s still alive. I’m being metaphorical here. Chill out.). Others spring from Scotland’s bloody history: the Mackenzie poltergeist, women accused of being witches in the 16th century, and those die-hard Covenanters (an extreme group of Protestants–I’m not getting into that just now). The stories that surround these ghosts colored my trip into Edinburgh’s closes (covered alleyways) and cobbled streets. Every pub has a tale, each street a distinct feeling of something happened here. AND IT IS AWESOMENESS! Especially for an aspiring novelist.

In honor of the city’s awesomeness, I thought I’d post a few photos.

This is the Heriot School. The man who took my husband and I through Greyfriars Kirkyard, which sits next door, told us that the people of Edinburgh once thought that children went here to learn how to be wizards. This was Rowling’s inspiration for Hogwarts! 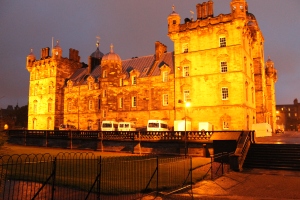 But I think Edinburgh Castle looks more like Hogwarts.

Here is the cafe where Rowling wrote much of the first book. They have excellent ale and lasagna (Hey, I was a bit tired of Scottish fare by the end of the week.)

Robert Burns wrote poetry in this spot. It’s freaky how much beauty sits just off the road in Scotland.

I could go on for hours here, peeps, but I’ll leave it at that. Scotland is for writers. As Lemon from 30 Rock would say “I want to go to there.” You should go with.

2 Responses to Squee! I went to Edinburgh!